Oh I say, no Wimbledon this year!

One of the most anticipated and widely enjoyed sporting events in the UK’s calendar is that of the Lawn Tennis Association championships at Wimbledon. The grass court competition, one of very few left, takes place in the Summer over the last week of June and first week of July. Sadly there will be no need to get the lawnmowers out this year but if they did the groundsmen will certainly be assembling their Mountfield Parts from https://www.diyspareparts.com/parts/mountfield/ to get it in perfect condition. 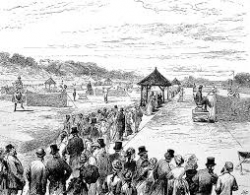 1877 was the first ever Wimbledon Tournament. It was only contested with a Men’s Singles comptione that was one by the very posh sounding Spencer Gore. Gore was a Rackets player first and foremost where the game of tennis originates from. The event proved to be very popular and was to continue.

Due to popular demand the Club added the Ladies singles and Men’s doubles in 1884. Tennis was growing in popularity as well. The game was still amateur with no cash prize. Competitors all had other jobs. In 1913 the first mixed doubles were introduced. One

of the most interesting elements of the event is that until 1922 the winner of the previous year only had to play in the final to defend their crown!