TV funny man Billy Connolly has been recognised with a prestigious award for his services to television.

The 75-year-old was unable to attend the event in which he won an RTS Scotland award; however, he thanked Bill Tennent from Scottish Television in his acceptance speech, stating that he put him on his show whenever he could not find anyone else! Speaking from the United States, Connolly also thanked the attendees and told them how much he likes these prizes.

A remarkable and diverse actor and comedian, Connolly has starred in everything from epic, groundbreaking movies such as The Hobbit to animated feature length films such as Brave. He is also a successful musician, stand-up comedian and TV presenter.

Despite a troubled childhood that saw him being raised by his aunts after his teenage mother abandoned him at the age of four, Connolly went on to have a long and successful TV and entertainment career. In the 1980s, he worked alongside Monty Python stars John Cleese and Martin Lewis. He has also collaborated with other big stars during his career, which dates back to the 1970s. More recently, Connolly has created travel documentary series, such as his travels on Route 66 and his tour of Scotland, proving that he can turn his hand to many different genres of TV entertainment. 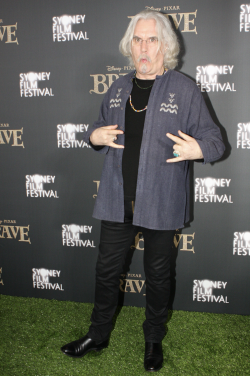 He is also famous for his music, which is predominantly folk songs; in fact, he pursued a career as a folk singer for some time before focusing on stand-up comedy. His career in comedy has seen him awarded other accolades, such as topping various lists of top comedians as rated by the viewers of Channel 4 and Channel 5.

Presenting Connolly’s well-deserved RTS Scotland award was Peter McDougall, a lifelong friend of Connolly who refers to the comedian as ‘our gift’ and speaks highly of his friend’s talent. His unique brand of dry wit and observational comedy makes Connolly a national treasure who fully deserves the awards bestowed up on him. This latest Scottish award will no doubt please Connolly, as he is a very proud Scotsman.