Anyone for Polo? You will need a few ponies 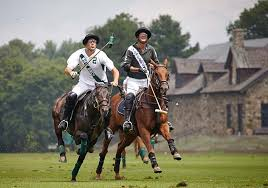 The game of Polo is not one that you can just “pick up”. It’s difficult to find the space in the local sports centre to accommodate the horses and the sizable playing field that is required. You also need a horse. In fact more than one, as it is very tiring on a horse to be spur about the polo field requiring bursts of speed at short notice. At least with some Mens Ralph Lauren Polo Knitware from EJ Menswear you’ll look the part if not actually play 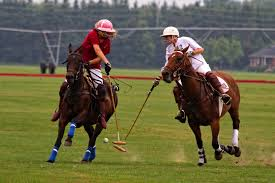 The game is played over a large field, 300 by 160 yards, between two teams on horseback. The ball is a large hard mass that used to be made of bamboo or willow like a cricket ball but is now formed from hard compound rubber. Helmets must be worn and the players use Polo mallets to knock the ball towards the goals.  At first glance it might seem like a total free for all with nothing but men and horses zooming around trying to hit the thing. You have to be a very good and confident horsemen.

There is quite a complicated set of rules to ensure that neither human or horse gets seriously injured. Most of them centre around the mallets being used in the correct way. For example you can “hook” an opponent’s mallet before they hit the ball as long as you are on the side of the horse they are attacking it. You can’t just ride your horse straight at an opponent either. You must respect the right of way.